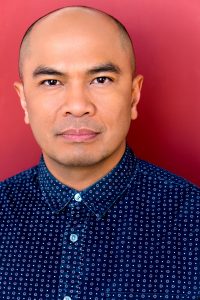 Say hello to new Entertainment Studies instructor Mig Macario! Mig will be teaching Acting for the Camera I in Fall 2019. He has over 30 years of experience in the entertainment industry as an actor, teacher, acting coach, casting associate, and filmmaker. Having appeared in over 50 Film and Television projects, Mig recently appeared in Velvet Buzzsaw for Netflix starring Jake Gyllenhaal and directed by Dan Gilroy (Nightcrawler, Roman J. Israel). Other credits have included roles on S.W.A.T., Criminal Minds, and a recurring role playing the iconic character of Bashful of the Seven Dwarfs on the ABC series Once Upon A Time.

We sat down with Mig and asked him 5 questions to get to know more about him and his course.

What do you hope students get out of your course?
That they can start feeling confident in front of the camera, both as themselves and the characters they’ve created. It’s a constant process as we’re always changing. Also that the actors can immediately start using what they’ve learned in class. 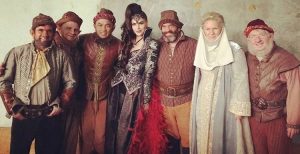 Mig Macario (third from the left) on season 6 of ABC’s Once Upon a Time. Photo credit: Gabe Khouth

What is one thing you want students to know before they walk into your class?
That it’s all about exploration and not perfection or a final product. When the focus is on exploration, I feel it creates more freedom in the work.

What are you watching or listening to these days that you are enjoying?
There’s so much great stuff everywhere right now. Handmaid’s Tale, Four Weddings and a Funeral (the series by Mindy Kaling), The OA, Stranger Things, and Star Trek Discovery.